We have footprints here….

Many people have found great comfort in the “Foot Prints in the Sand”  prayer, poem, lyrics. The authorship is debated but what it highlights for me is that we have predecessors. Now I know that is not at all the intent of the  author! Isnt it good to know others have gone before in all walks of life. The fact the the book of Job in the scriptures is as far as we know the first recorded writings of God, even though man has put it in the middle of the Bible! God wanted us to know that suffering is a part of life and how to walk the road.

I believe the wise person will take note of others whose footprints go before us and learn from them, both the good and the bad, the failures and successes. We don’t have to walk alone. We live in a very privilege age where knowledge is readily available to us concerning all areas of life. There is a stark difference between the person who has there own footprints and those who have studied at a distance. Whilst the former may not be eloquent in communication, they have tacit knowledge; that whilst their experience and interpretation may be  quite different to ours, they may have just one or two insights that can be so beneficial to us as we create our own footprints.

There is nothing new under the sun. If you are thinking or experiencing it, you can guarantee so are others. So dont walk alone!

Saturday, 19th 2013 Mike would have been 22 years old. We had a friend staying from Australia so we thought it would be nice to show him Mike’s grave. We see more and more that the emotion of loosing Mike goes deeper into the soul not so much on the surface. The need to visit Mike has moved on, but there is not a day that passes when he is not thought of. At present I am digitizing all our photos and its a great joy but mingled with sadness to see the happy child and the excitement of life. If there was one piece of advise I would give parents, its to recognise the gift our kids are to us. They are not an appendage. Do all you can to be there at important events, let then join in daily chores, even when it takes 3 times as long! Spent time reading that book or playing that game. The ability will be gone and the storehouse of memories will be less than it could have. 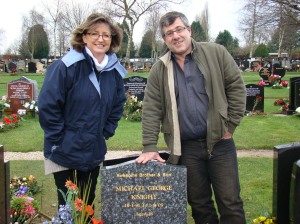 “First, I thank my God through Jesus Christ for you all, because your faith is being proclaimed thoughout the whole world” Rms 1v8

I wrote to Laura a couple of days ago saying ” well I miss you sooooo much but I would rather you 10,000 miles away, walking with Jesus than being at home and not”. So it is with great pride and thanks to God today for my little girl who celebrates her 19th birthday there in Pretoria, Sth Africa. What a joy to know she is actively sharing her faith story with people from all walks of life there. Laura

Ship Wrecked……Happy Anniversary to all you Logos Survivors!

Just after midnight on January 5th 1988 Kathy woke me to tell me we had run aground. We lived on the small ship, Logos with another 110+ people, in our small but cosy cabin. Typical of Kathy, she made it homely and being Christmas and New Year, it was filled with goodies and seasonal decorations.

We were at the very tip of South America and knowing it was going to be a rough voyage, I told her to go back to sleep. But she was right! Within minutes there was a bang on the door telling us to muster at our life boat station with our life-jackets. Due to professional miss judgement by the pilot and our captain, we ran onto some large submerged rocks. Over the next four hours we monitored the intake of water at the same time, the crew tried to reverse off the rock.  I was “The Book Fair Manager” and so went down into the holds to check how the books were doing. We picked up those that had fallen and placed back on the shelves, all the time watching if water was coming in. Why pick up books when you know the ship has been punctured!

The Logos was a solid little vessel that was doubled hulled due to her original function up in Greenland. People ask “were you scared” but in truth I dont think many of us were once we realised we were stuck on the rock. We were sailing from Ushuaia, Terra del Fuego, along the Beagle Channel. The views were spectacular of snow caped jagged mountains and glaciers.

I will never forget seeing the power of water under pressure. Whilst there were crew on water watch on the lower deck of the hold, water started to come in at the higher level. There was a disused sonar trunk about 3 feet sq that we had as a small office. Many years earlier a steel plate was welded into the shaft  forming the floor for the office. To my amazement the water was like a blow torch opening up the weld lines, just like a tin can would open. As the water came in faster and faster the 5 degree list began to increase. Tom and Maggie Dyer, a couple from San Diego, were onboard with the two children, Tommy (2) Joshua (few months). Tom was the 1st Officer and had asked me several months before to help Maggie with Tommy when we had life boat drills. When the abandon ship signal came, 6 short and one prolonged ringing of the bell, we mustered up on the deck. By then the ship was moving and being pounded onto the rocks. The intake of water was causing us to list more and more to port. I found it increasingly hard to hold Tommy with the large life jacket and the heavy wooden benches were starting to move from one side of the deck to the other. Seeing Maggie also struggle with Joshua I shouted to my assistant, Ricardo, to come and hold Joshua but to first remove his life jacket as I had done. It was the only way to securely hold the kids. 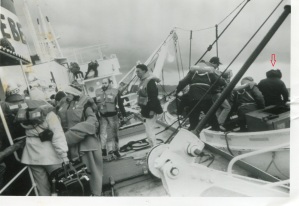 Well its a long story but we all got off the ship without injury. A couple of days later we were flown to Punta Arenas were to our great surprise and joy, Kathy discovered she was pregnant with Akila.

I suppose the main lesson I leant from that, due to the fact that we left all our possessions, including our wedding photos, was that “things don’t matter, people do”.

During the waiting to hear from the GP whether the lump on my neck was benign or malignant, I spent too much time contemplating past, present and future. Would the awesome pictures of “life” be shattered yet again? Isaiah 2 talks about the “day of the LORD” when all those beautiful pictures will be shattered. At the same time, its that same Power that leads us into realities that will last forever. Isaiah 33v17 talks about a land that “Is very far off”. That land is promised to all who trust and walk with Jesus, but I know that each shattered dream brings me closer to that “very far off” land. And as I dwelt on the topic of death, I concur with Paul who wrote in Philippians 1v23, that suffering increases the desire to be with Christ, which is “very far better”.

Im not sure where the saying comes from “born into trouble”. Jesus said you must be “born-again” to enter the Kingdom of God (John 3). Unlike some who proclaim awesome pictures of life and prosperity, I think the Christian is “born-again into trouble”!! Kathy and I wince when we hear people say in very motivational ways “how we want more of God”. I sit there and think “you do not know what you are saying”. Are they really willing for more pain, more suffering, so they can experience the grace and mercy of God, because that is what Paul says in Philippians 1v29 “but to also suffer for His cause”

As I accept that my life history was written by Father God, before I ever existed, that I can lay down all my awesome pictures, all my dreams and hopes, and I accept that what ever comes my way is permitted by Father God, which is not only best for me but “very far better” than any of my hopes and dreams. Can I resign to this? I know if I can I will find peace but lets be honest, truth and reality are often quite apart! Check out the Psalms if you dont share this reality.

And so my learning of eternal things is accomplished through my life path passing through His death and experience His suffering  in order to understand resurrection.  As I look out the window of this barren grey winter morning, the “very far off” of spring produces the “very far better ” of autumn.