When the order of life gets out of sync

We experience 4 seasons, Spring, Summer, Autumn, Winter. They should follow one after the other at set times. I have just spent the weekend in the Pocono Mountains in Philadelphia  where I experienced a bizarre event, snow two months before Winter when the autumn leaves are still falling. 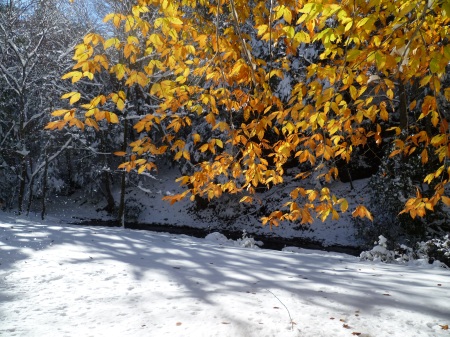 I should have died before my buddy Mike. There is an order of life and it didnt happen.
Todd and I had planned a game of golf, but with the snow starting to fall, our plans to enjoy the autumn colours around the golf course were disruppted. In fact we ended up sitting in the lodge with a nice fire for the rest of the afternoon.
The next morning I awoke to the most spectaular scene, a combination of winter and autumn.

Beauty of the bizzare

How awesome to see the beauty of these two distinct seasons come together. At the time when the snow was falling, we were out on our bikes, clear skyes replaced by snow clouds and sleet and winds.
It made me think about life after Mike and how beautiful things have come out of the bizzare.

Does God Speak? When does He Speak?

We as a family can tell so many stories over the past two years of how God has spoken to us. At times you wonder in your questioning humanity “was that God”? But then, He verifies it. Most times when He spoke it was unique and either for Kath, Akila, Laura or I. Other times it was for all four. So often His Word, the Bible was a great comfort and either the source of His Word, or the confirmation of what He said to us. It could be through a sign on a gate, a card through the door, the words of a song, the cloud formation, poems, verses of scripture……..

And then guess what? He is not speaking as often or as loud as before. I wondered at first whether I had become deaf to Him. I longed to be back in that place, although the intensity of it was physically shattering. There were days I said to Kath, “I cannot handle this intensity of God’s presence, physically I cannot endure it.”

I was preparing a message yesterday morning that I have to give today. Its on the good Samaritan and the 3 types of people in that story Luke 10:25-37. I like to think of myself as the last person, the one who was ready to help the man. On Thursdays, I like to go into town and sit and chat with people about my faith in Jesus. Yesterday, I met a man who had used drink to kill his pain. He showed me bruises on his chest and hands he said he had received through the process of being arrested for abuse to his wife and kept two days in a cell. He showed me the bail papers and has to appear in court on Monday. I’m not sure how much of the story was one sided! My little tract, with Mike and my story has my mobile number etc on it. I passed it to him and said “give me a call and if I can help I will”. As I was walking home, God and I had a little chat. Well more like He was telling me! He showed me that my giving; my time, my story, my money, or helping etc was conditional. In the story of the good Samaritan, I had not paid attention to his comments after he paid the two pieces of silver. He said “If your costs for the man are more, then I will settle up when I come back”. He had done so much for the man left for half dead, put him on his donkey, brought him to an inn, paid for his keep. I know if I want to help this man, then it will invade more time, effort, money etc than I want to give. My charity has boundaries. God’s love is limitless!

Here I am in town talking to people about God, and here is God on the way home talking to me about my attitude.

I’m not going to protect you from pain!

When it comes to the spiritual side of our lives, is our capacity for receiving in tune with His broadcasting! May I suggest that due to our lack of desire to sit and receive a good signal when life is great, to pick up the messages He is broadcasting when “the sun is out”, we miss out on so much but think life is great. Then along comes pain, through all sorts of life’s experience. All of a sudden, my Spiritual Receiving Equipment is checked over and tuned to the Broadcasting Signal of God! Then I am listening.

Lots of questions, but simply put. I am no longer going to protect myself or people I care for from pain. Understand me, of course I am going to do all I can to avoid circumstances that lead to pain. I do not wish pain on anyone and will do all I can to avoid it  in the first place. But, when events take place that bring emotional pain, I want to help myself and others, polish up the antenna, embrace the pain and say “If we have to endure this, then let’s make it a positive experience not a negative one, lets grow and be a better person for it”.

Is your name important?

Whats in a name? Is your name important? Does it have some meaning other than what the name books mean? In the movie the Count of Monte Cristo, at the end of the fight on the beach Luigi says “His name, we will call him Zattara”, Edmond replies “It sounds fearsome” to which Luigi says “It means drift wood”!  Seeing as Edmond had been washed up on the beach. What a shame, poor old Edmond thought it had some great meaning to it after just winning the fight!

Back in August, when visiting my mum and my village of childhood, I went for a walk down by the River Chess. I passed the cemetery where mum interned Dad’s ashes. I decided to go over and have a look and think for some moments about dad’s life. As I came close to his plaque, a felt a huge emotion rise deep from within. I so enjoyed seeing Dad’s name! 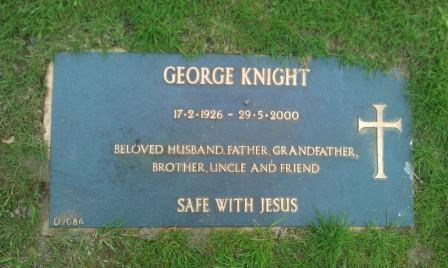 Your name is important!

Mike’s name took after my father, his grandfather, Michael George Knight. When he was small we called him Mikey. It was a cute name for a cute boy. As he got older we called him Mike but if we wanted to talk formally or I was ticked off at him I would should “Michael, come here”!

Our names are important. God has placed a great emphasis on recording in the Bible names of people, or giving them a new name. Because we are made in the image of God, because my parents gave me my name, because they represent who I am and where I come from, they have significance. When I saw my Dad’s name, I was proud at that moment. He was a real person, whom I had known and loved. There was a story behind that name. We honour our soldiers who died in the war with their names on a cenotaph whose remains lay else where. We recognise in the mass of humanity we are an important individual, even if not every one experiences the love of those who know us.

Do you wish to be healed?

What a strange question to ask a sick person, “do you wish to be healed”? One would immediately think that a sick person would like to be restored to complete health. Well this was the question Jesus asked a man in John 5 who had been lying sick by a pool for 38 years. Surely after 38 years of being in a debilitating condition anyone would jump at the opportunity to become well.

Let me make a little confession, I miss the grief, the pain, the tears! I don’t want to be well. That may shock you. If you notice I am not blogging so much. My mind is empty, my emotions have stabilized, the pain is gone. In a bizarre way grief kept me close to Mike. Some people say “you have to let him go”. I cannot relate to that, Mike is gone, that is not my issue, its grief I have to let go, and I have, but there are days I want it back.

Grief for me has been an incredible drug. I do not know what it is like to cut oneself in order to find emotional relief. I do know that the emotional pain I have experienced became familiar and in many ways a friend. I knew I was getting better, I was standing on a conveyor belt being taken away from where I was, but I was reaching back with an out stretched arm trying to cling to where I was. For the man by the pool, may be it was he grew accustomed to the daily attention he received. If he was healed, he would no longer be the focus of many. There may be many reasons why we do not wish to be  healed, mine is simply because I want to stay close to my buddy! May be that is letting him go!